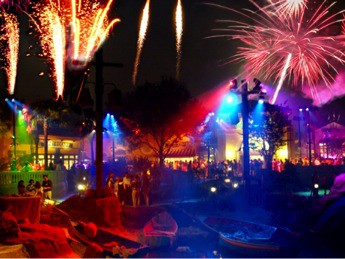 Orlando is a spectacular place to ring in the new year, with a variety of parties and celebrations to suit every age and interest. For anyone with children or simply those who are a child at heart, the theme parks also play host to some special displays and events on New Year’s Day. If you’re staying in a comfortable Kissimmee villa like those at Fantasy World, you’ll be able to enjoy easy access to all kinds of New Year festivities.

If you and your family are the types who can’t get enough of Christmas, you’ll love Grinchmas(TM) at Universal Islands of Adventure. The park’s Seuss Landing(TM) transforms into the whimsical world of Grinchmas, where every nook and cranny holds a special nod to the wonderful world of Dr. Seuss. Don’t miss the Grinchmas Who-liday Spectacular, a live telling of the beloved holiday tale, starring The Grinch himself, with music recorded by Mannheim Steamroller. Many of the Whos from Whoville can also be seen throughout Seuss Landing, where they are happy to stop and say hello and wish you a happy new year. The Grinchmas festivities run through January 2, 2016.

The Osborne Family Spectacle of Dancing Lights has been thrilling visitors for 20 years, but this is the last year for this wondrous light display, so you don’t want to miss it. The Streets of America at Disney’s Hollywood Studios are filled with vibrant, undulating lights that shimmer and shine and move to the sound of happy holiday tunes. This spectacle must be seen to be believed, so don’t miss this last opportunity to take in a one-of-a-kind light experience. The display is part of the park admission and begins at dusk and runs until park closing each evening, through January 3, 2016.

It’s hard not to love a parade, especially when it’s the Macy’s Holiday Parade! The famous Macy’s Thanksgiving Parade kicks off the holiday season, but when the parade finishes in New York, it moves to Universal Studios Florida, where many of the balloons and floats become part of their own holiday spectacular. As well as the balloons and floats, there are clowns, marching bands, and Santa even makes an appearance. This wonderful parade runs through January 2, 2016, and makes a great way to end the holiday season for another year.

A Kissimmee villa, like the ones at Fantasy World, offers a great place for families and friends to stay within easy reach of all of the Orlando theme parks. Whether you take advantage of the festivities on New Year’s Eve, such as Universal CityWalk’s massive New Year’s Eve party, or save your celebrations for New Year’s Day, you’ll find plenty to keep you entertained.