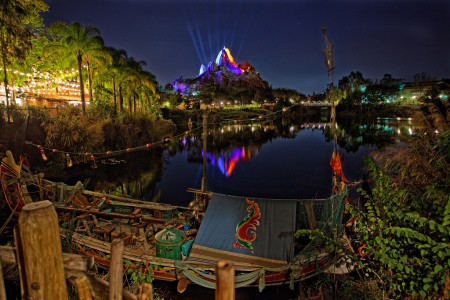 No matter how many times you visit the theme parks in Orlando, it seems that there is always something new to see and explore. Staying in one of the resorts in Kissimmee gives you the perfect starting point to visit any of the popular parks and attractions, including Disney’s Animal Kingdom, which has just launched new and updated attractions, specifically meant to be enjoyed after dark.

Among the new attractions is The Jungle Book: Alive with Magic. This limited-run, 20-minute show will have multiple evening performances. This breath-taking showcase features impressive visual effects, talented performers, and music from the film. Among the special displays are images projected onto sheets and sprays of water.

New hours, expanded outings, and stunning light displays have also been added to the park’s evening offerings. The popular Kilimanjaro Safaris will now have evening outings including special lighting effects that appear to extend dusk on the savanna. Expedition Everest also has evening trips on the high-speed trains into the Himalayas. Throughout the evening park hours, the spectacular Tree of Life will come alive with inspiring projections of natural scenes as well as glimpses of Disney films.

To make the most of the summer hours, Animal Kingdom will now be open from 9 a.m. to 11 p.m. As well as all of the attractions, shows, and rides, there is plenty of great dining to be found in the park, including the newly opened Tiffins, a restaurant inspired by exotic exploration, and Nomad Lounge, a cocktail lounge where you can try Asian, African, and South American libations.

By choosing one of the resorts in Kissimmee, such as Fantasy World, you are within easy access of Animal Kingdom and the many other amusement parks throughout Orlando and Central Florida. Fantasy World even offers its own water park among a wealth of other amenities, giving you and your family plenty of ways to while away the days and make the most of your summer vacation.